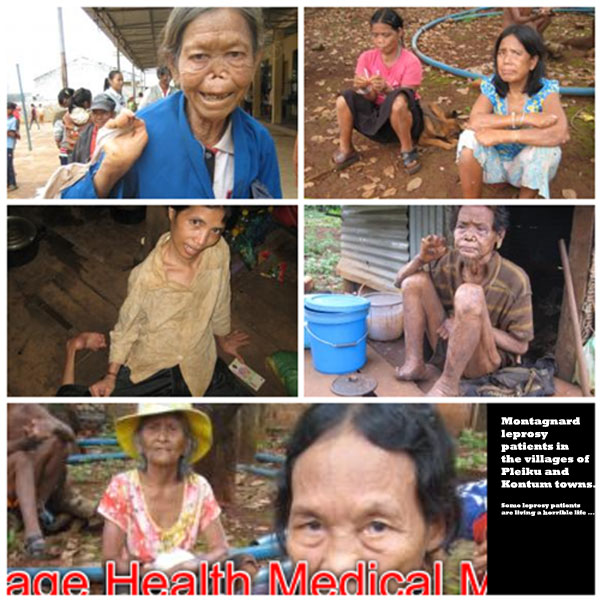 The extended visit of the leprosy patients, orphans, and ethnic minority communities in Pleiku and Kontum, after the main medical mission, was an eye opening and a wonderful experience for some of us.

Four members of the Mission team, Tien, Hang, and two nurses, Tuyet and Phuong, continued, after the main medical mission, to Pleiku and Kontum to visit the Montagnard ( Người Thượng ) leprosy patients in their villages, and several orphanages in Gia Lai and Kontum Provinces. As you can see in the photos, some leprosy patients are living a horrible life, some with no fingers, no hands and no feet. Some urinate on the floor of their living quarter, until someone cares enough to stop by and splash water on them, maybe give them a quick shower and a clothing change. In a few worst cases of the old and severe leprosy patients, they may have some worms on their body because, with no hands and feet they can not move around and take care of themselves. Many healthy children have been living with their leprosy parents for quite some years, but nobody knows how long that condition will last. Sometimes it takes years for patients to show symptoms of leprosy decease.

To offer a healthier water environment and avoid diceases, Vietnam Village Health also pays for the cost of a well in a village, $1,500, including digging and building a well, a huge water tank and its stand, a pump, pipes, and a clean cement area for water distribution. Please see a photo of the well in this report.

We pray for these miserable leprosy patients. Your donations would give the doctors, nurses, priests, sisters, and brothers the funding and the cares that these leprosy patients desperately need.